Managing your AS & Resources

ASAS-EULAR* recommendations for the management of axSpA stress the importance of pharmaceutical (drugs or medications) and non-pharmaceutical treatments together. This may require life style changes to build more activity into your life for optimal outcomes.
There are relatively few drugs approved for axSpA but new medications are being developed all the time. The most effective category of drugs for axSpA is biologics. Unfortunately, until precision or personalized medicine is better perfected, it is not known which biologic may be best suited to you. This means that at present you may have to try two or more biologics before you find one that is effective for you.
There are some global differences in brand names of drugs and accessibility to them varies
* ASAS – Assessment of Spondyloarthritis International Society. EULAR – European Alliance of Associations for Rheumatology.
globally. Nevertheless, we have followed recommended treatment options in this brochure. ASIF advocates for equal accessibility to effective medications globally.
Why take drugs? Medications recommended for axSpA can help with reducing inflammation and relieving pain. However, they cannot cure or reverse the effects of the disease. There is evidence that treatment with biologic drugs can significantly reduce the progress of disease and also, if started early enough, can lead to a high chance of remission. Both outcomes improve the quality of the patient’s life.

NSAIDs or Nonsteroidal Anti-Inflammatory Drugs are the first treatment option because they are effective in reducing pain and stiffness.
Typical NSAIDs are aspirin, ibuprofen and naproxen. They are available in a healthcare provider should monitor you for any adverse side-effects.
Local glucocorticoid injections may be prescribed for persistent joint inflammation, but long-term treatment by systemic glucocorticoids is not recommended and should be avoided.
b) Analgesics.
Analgesics (pain relievers) may be prescribed when other treatments have been poorly tolerated or failed to control or eliminate pain. Non-narcotic analgesics are used today.
c) bDMARDs
Biologic Disease Modifying Anti-Rheumatic Drugs, or biologics for short, started coming to market in the late 1990s. They were a welcome addition to drugs for axSpA, for which NSAIDs had been the main treatment.
Biologics are taken by infusion or injection in doses and at intervals determined by your rheumatologist.
There have been many biologics developed since the late 1990s but not all are approved for axSpA. The first approvals for axSpA were for Tumor Necrosis Factor, TNF, Inhibitors. These include adalimumab, certolizumab, etanercept, golimumab and infliximab. In 2015, secukinumab, which suppresses Interleukin 17 and is known as an IL-17 Inhibitor, was approved for axSpA. Several other IL-17 Inhibitors have been developed of which ixekizumab was approved for axSpA in 2019. Other biologics have been developed or are in trial for axSpA, for example IL-23 and Il-6 Inhibitors, but have not yet shown any efficacy in axSpA. Tofacitinib is a small-molecule JAK Inhibitor taken in pill form that is being prescribed off-label for some axSpA patients, with positive results.
You may be prescribed a biosimilar. As originator biologics come off patent, it allows other manufacturers to produce that same biologic. In this case, the new manufacturer produces a biosimilar. Biosimilars have the same safety and efficacy profile as the originator biologic. They are usually cheaper than the originator because they have been produced with more advanced techniques and technology.
d) csDMARDS
Conventional Synthetic Disease-Modifying Drugs include methotrexate and sulfasalazine, neither of which are recommended for axSpA because of their lack of efficacy.  However, they are often prescribed to supplement other treatments and sulfasalazine is recommended for peripheral disease.
2. Non-Pharmaceutical Treatments:

a) Exercise
The role of exercise in managing your disease cannot be emphasised enough. Exercise is necessary to maintain flexibility, range of motion and good posture. Exercise has many other benefits such as reducing pain, stiffness and fatigue. Please refer to our Exercise brochure for more information. Remember that any activity is better than no activity; that exercising in a group is better than exercising alone, and that any exercise regimen should include elements of stretching, strength and stamina.
Yoga, tai chi and Pilates are low-impact forms of exercise that are popular. 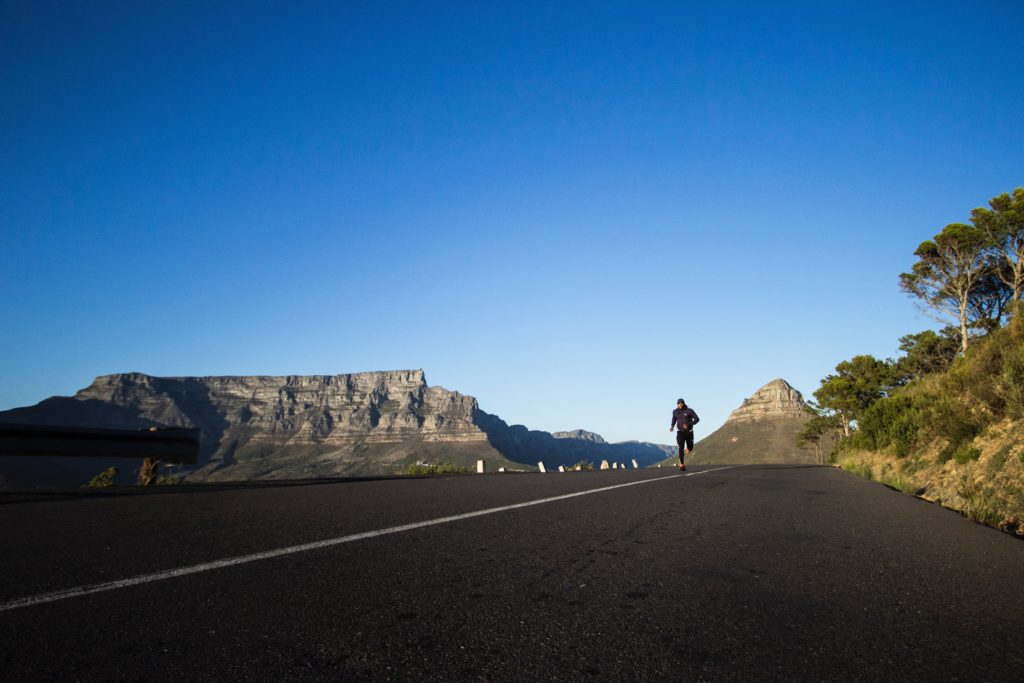 The focus for exercise for people with axial SpA (AS) is on improving or maintaining your:

Exercise means moving. There are always stretches that you can do while sitting or lying down. More active forms of exercise are beneficial provided they are low impact, for example, walking or swimming, and are done on a regular basis.

Any exercise is better than no exercise unless you are in the midst of a flare. Supervised exercise and group exercise are more effective than exercising at home because you are more motivated in a supervised or group setting.

Any exercise you decide to undertake needs to be regular, consistent and kept up over the long term. So, it’s important to choose something you enjoy.

Research shows that educating yourself about your disease and how to manage it will result in a better outcome for you. Education starts with getting the right information from your rheumatologist and healthcare providers. Visit our website for links to axSpA patient organization websites and for other educational resources. Use the Internet wisely for reliable, evidence-based information.

c) Physiotherapy/Physical Therapy/rehabilitation
Exercise should start as soon as you are diagnosed. But if you experienced a long delay to diagnosis and have lost some range of motion, it may be difficult to start an exercise program without supervision and direction. Physiotherapy can help you maintain and improve your flexibility. Your physiotherapist should fully evaluate you before starting any treatment, and also track progress. There are a number of measures that can be used to determine progress, such as the Bath Ankylosing Spondylitis Assessment Indexes.
d) Patient associations
It is recommended that you join a patient organization, either a specific-disease organization if there is one in your country (see our website for a list) or a general arthritis organization. Patient organizations provide valuable information about your disease, the opportunity to attend educational forums and meet with others with your disease. Research shows that membership in a patient organization improves your disease outcome.
e) Self-help groups
Self-help groups can mean physical, face-to-face meetings or virtual online meetings and discussion, such as on social media. Any opportunity to talk to others to share symptoms, treatments, coping strategies, information and tips is beneficial. Participating in a self-help group has been shown to improve outcomes.
f) Surgery
Sometimes surgery may be indicated, most usually for hip and knee replacements where there is severe pain or functional disability. Spinal surgery to fuse the spine or correct  kyphosis (forward bending) may also be considered in some cases.
Patients with axSpA frequently use
CAM to either complement to or as an alternative to conventional medicine. They do so to relieve their symptoms and improve their health. A few CAM treatments are addressed below.
a) Acupuncture
Acupuncture may provide some short-term relief from pain, but evidence for its use in axSpA is lacking
b) Cannabis
In some jurisdictions medical cannabis is legal. While cannabis can’t cure axSpA or slow disease progression, some people report that it helps to alleviate their symptoms.
c) Chiropractic
Chiropractic spinal manipulations should be avoided if you have axSpA, particularly if you have osteoporosis, bony growths or fusion in the spine, or atlantoaxial (craniovertebral junction) instability.
d) Massage
Massage therapy, or manipulation of the soft tissues of the body, has shown to be effective in muscle relaxation and pain relief, particularly for deep tissue massage. However, results are generally short-term.
e) Meditation/Mindfulness
Research has shown that mindfulness meditation can help individuals better manage arthritis pain. Mindfulness can be as little as taking a purposeful pause from your day to as much as changing your lifestyle with the Wim Hof Method.
f) Natural health products/nutritional supplements
There is a lack of good evidence for the role of CAM dietary forms, including herbal remedies, and a risk of potential interactions with conventional medicines.

Exercise Resources For As Patients

Resources For Patients And Health Professionals 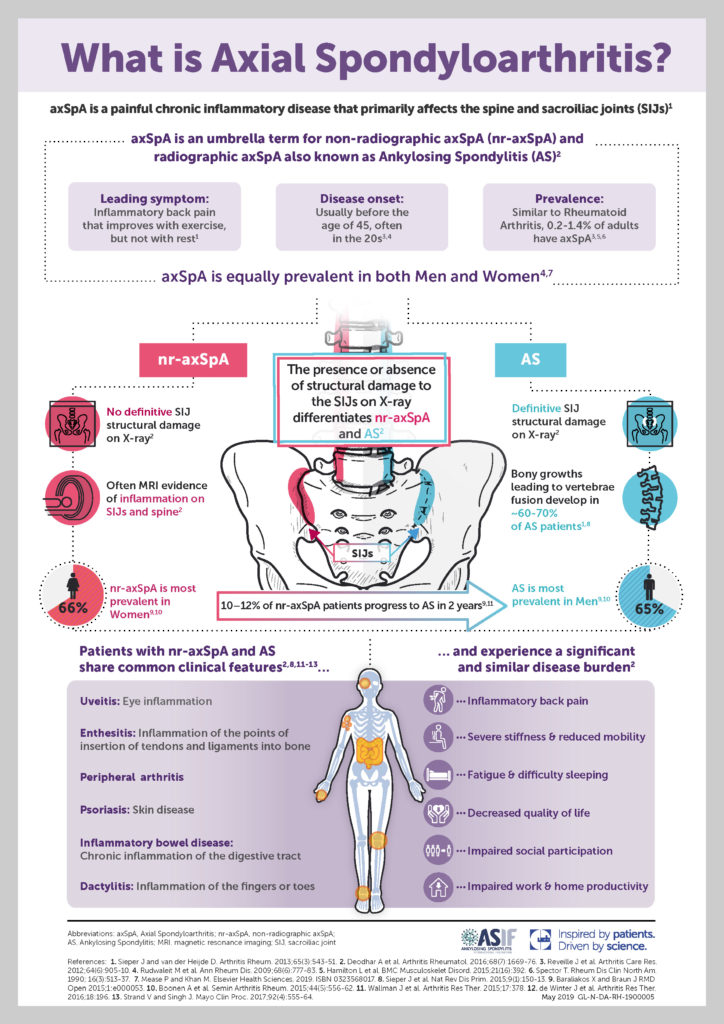 What is Axial Spondyloarthritis 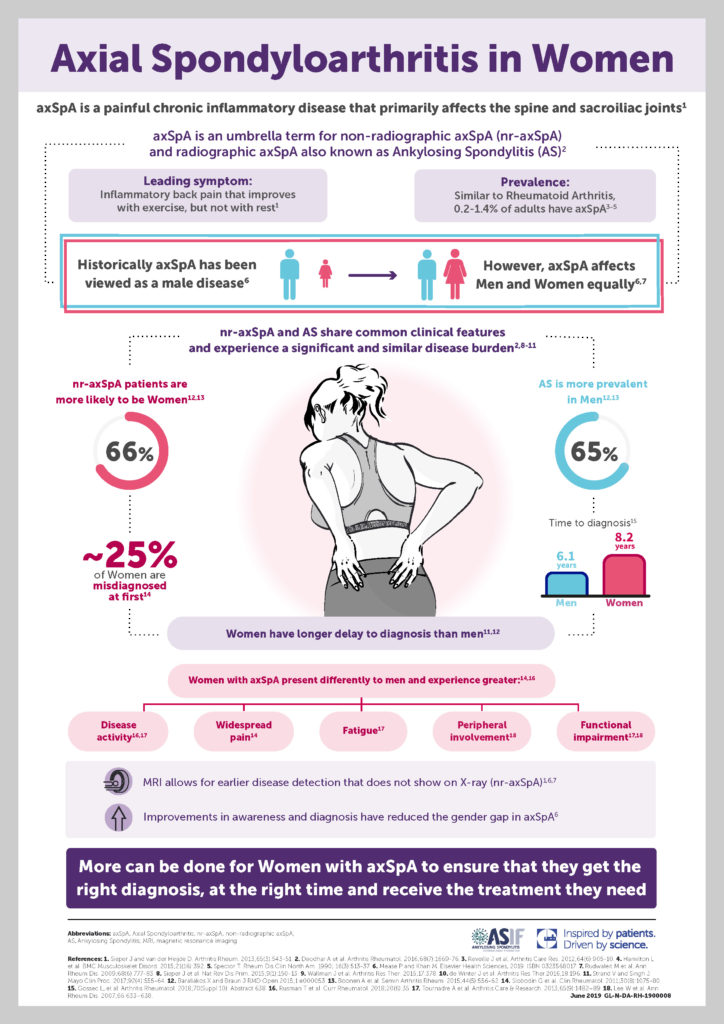 Historically AxSpA was thought of as a man’s disease.  This is now known to be incorrect but women continue to be misdiagnosed.  This infographic shows some of the statistics 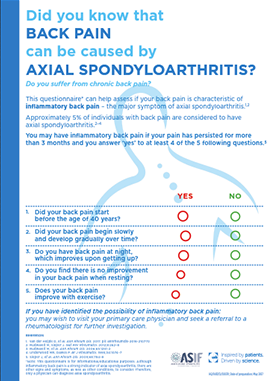 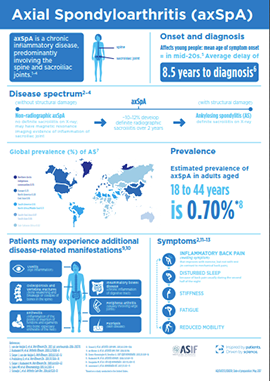 axSpA is a chronic inflammatory disease, predominantly involving the spine and sacroiliac joints. 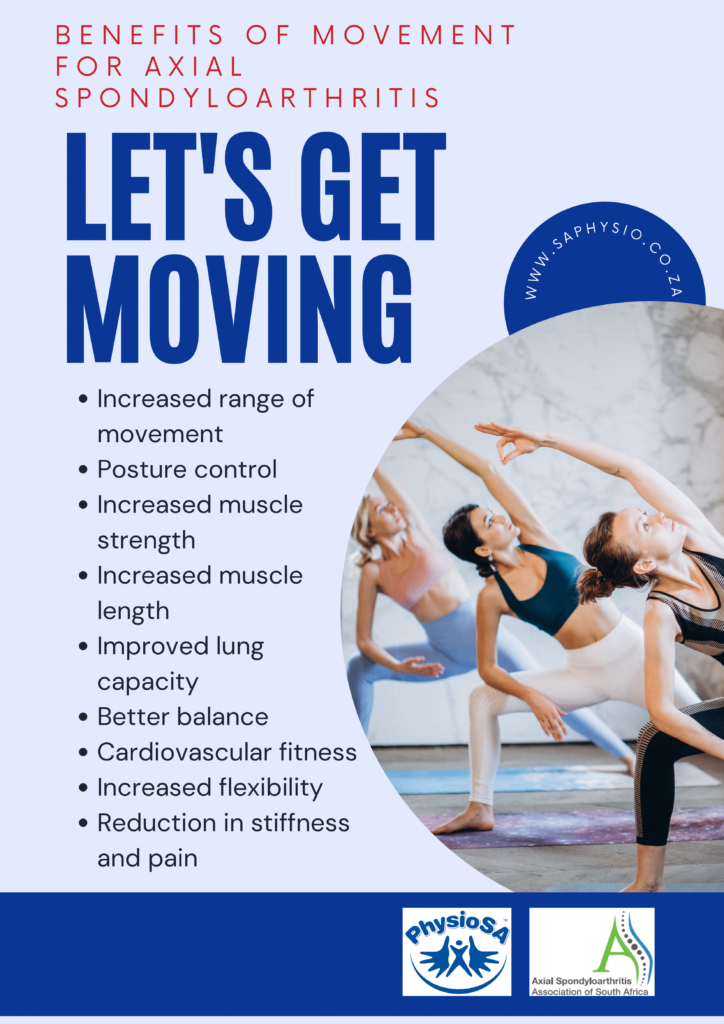 What is Axial Spondyloarthritis? 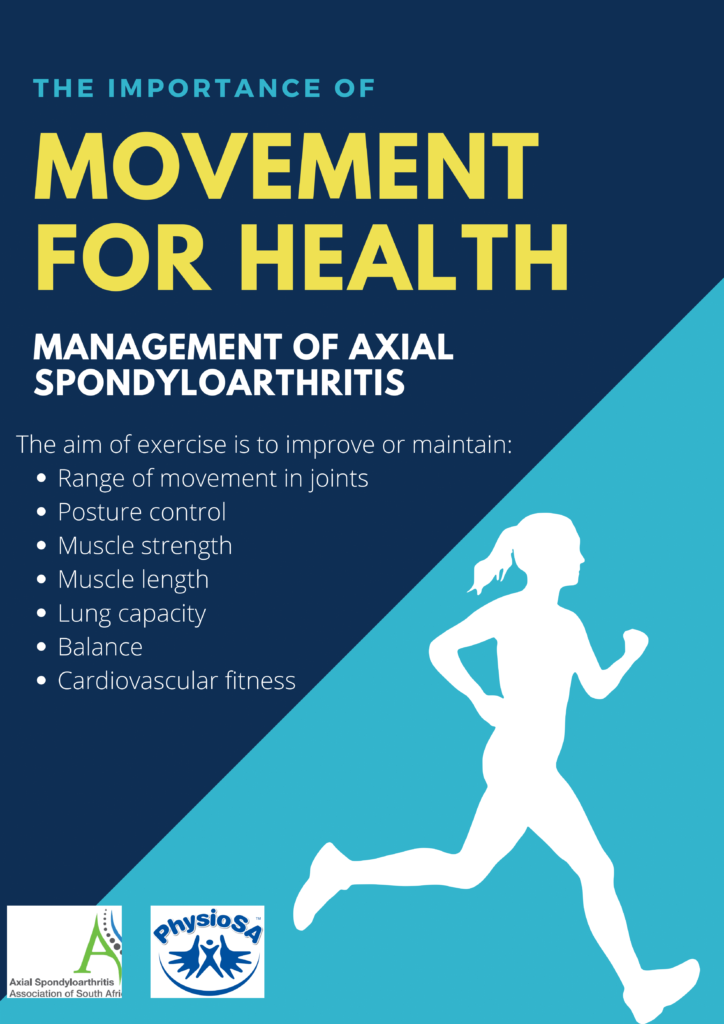 The Importance of Movement For Health 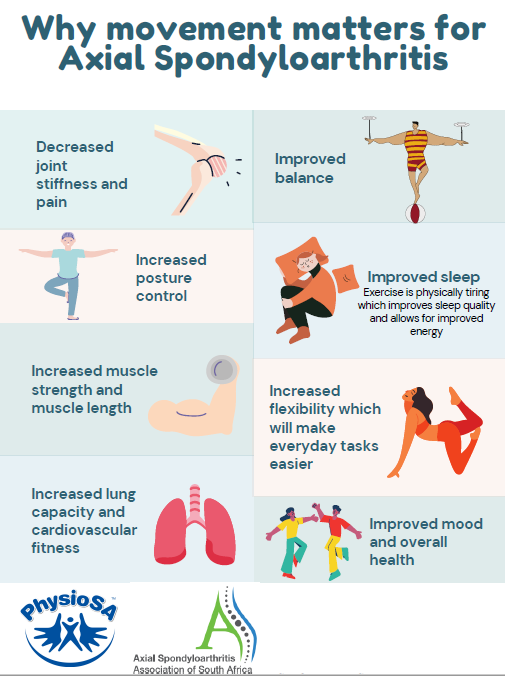 Why Movement Matters For Axial Spondyloarhritis